The immediate future of the Marvel Universe looks bleak, grim and downright savage! Several of Marvel’s most ruthless characters receive the spotlight and band together in the month of September. Punisher, Venom, Wolverine and Conan are front and center for most of that action, including when the Savage Avengers finally form their team in their fifth issue. Juggernaut joins Punisher’s Kill Krew, while Frank Castle joins with other vicious vigilantes – Black Widow, Moon Knight, Night Thrasher and Danny “Ghost Rider” Ketch – in his main book. Black Widow stars in a new mini series, Web of Black Widow, which dives into her origins, and despite the lack of an ongoing series, Moon Knight receives an Annual book. Wolverine also has an Annual, as does Ghost-Spider fresh off her new series debut issue. Venom and Spider-Man continue to deal with Cletus Kasady in the main “Absolute Carnage” event and Danny Ketch stars in a new event tie-in, as do an Avengers team consisting of Wolverine, Captain America, Hawkeye and Thing.

Two more teams receive new books: Strikeforce starring Blade, Angela, Spider-Woman, Wiccan, Winter Soldier, Spectrum and Daimon Hellstrom; and Black Panther’s Agents of Wakanda. The Fantastic Four deal with two unwelcomed visitors as Black Cat tries to break into their headquarters and Gwenpool tries to break up Marvel’s first family. “The Prodigal Sun” story concludes with the Guardians of the Galaxy. Other books of note include a couple of books which enlist famous creative teams for one more story. Erik Larson returns to the world of Spider-Man, Chris Claremont and Bill Sienkiewicz reunite to once again tackle the New Mutants and classic Avengers writer Roger Stern pits Earth’s Mightiest Heroes against Loki one more time.  Movie and television big shot J.J. Abrams enters the Marvel Universe with the help of his son Henry for a new volume of Spider-Man.

Dopplegangers or repeat appearances of our main characters are found in the Essentials, Marvel Action, Marvel Legends, Marvel Tales, Marvel Super Hero Adventures and Mighty World of Marvel books as well as any MCU tie-in series and thus do not count for their prime universe counterparts. Please see the attached Power Summary file for further power clarifications and follow along with our #FantasyComicLeague tweets on Twitter for official power scoring and discussions. Appearance estimates, based on comic solicitations and cover artwork provided by the Marvel Database wiki, are meant as a guideline and not an indication of a specific draft order. Character names, team designations and power sets conform to the most current information provided by the Database. 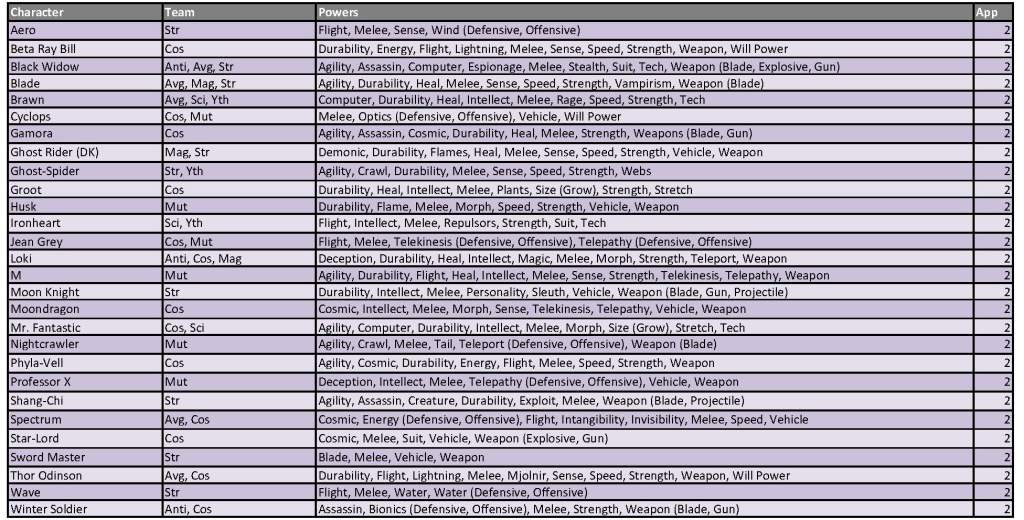