Hey y’all, it’s a new era for the Multiverse. A Fresh Start. The competition will be closer than ever this season, which I can say with the foresight of about two months as I write this in November. New addition Agent Hyrup, husband of Asgardia Division Leader Hyrup, has brought out a competitive streak this season. He joins Multiversal mainstays, Agent Alex, Agent Brat, and Agent Bittner (now Agent 2099).

Agent Hyrup formed Team Rebels: Deadpool, Domino, Black Panther, and Cyclops. Cyclops, likely a favorite, was a weak link on the team with 7 points. His team however took first place, with a team riding that movie high; Panther got 18, Domino got 21, and Deadpool got 33. All together, they scored 79 points. An amazing introduction.

Agent Martineau took second. He took The Scream Team, made up of Venom, X-23, Doctor Strange, and Logan. Venom, a favorite who I have always banked on in the best of times, got a record 32 points, one point off from Deadpool’s total. The Wolverines dragged my team down, scoring 7 (Laura) and 11 (Logan). They altogether scored 67 points. 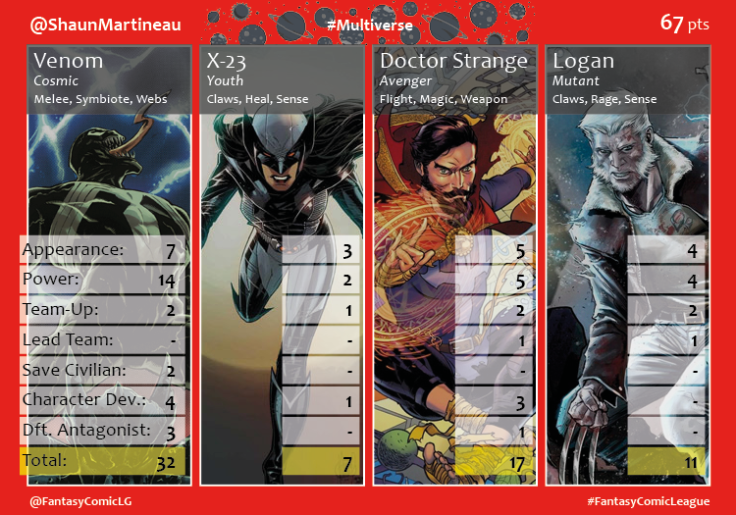 Agent Alex came on the scene hard, with team PoppingItSeverely. His team was made up of Captain America, Storm, Honey Badger, and Warpath. Warpath and Honey Badger were both favorites, that handicapped him with 4  and 6 points. Both Storm and Captain America scored over 20 points, with 22 and 26 respectively. They altogether scored 58 points. 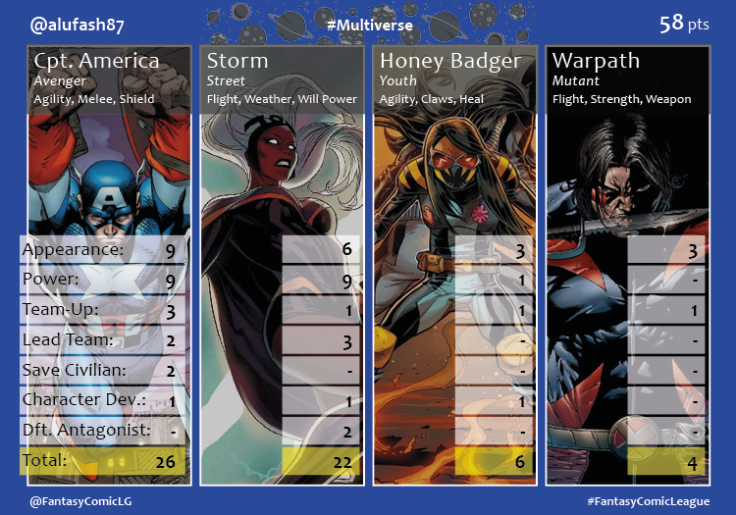 The Multiversal Mainstay, Agent Brat, came out strong as well. His themed team, OfMarvelsAndMutants, was incredibly well balanced. The team consisted of Captain Marvel, Ms. Marvel, Marvel Girl, and Kitty Pryde. Carol lead with 14, Kitty Pryde followed with 13. Jean and Kamala tied for 12. Unfortunately, without any 20+ point getters, it was not the month for his remarkable balance. He got fourth with 51 points.

Agent 2099 put his money down on the Mad Thinkers of the Multiverse. His team was made up of Tony Stark, Reed Richards, Loki Laufreyson, and Jean Grey. Unfortunately, they did a bit too much sitting around in thought. Tony gave an admirable performance with 13, but the others did not break ten. Both Jean and Reed scored high in a single outing, with 8 and 7 points respectively. Loki unfortunately only got 2.

Well I have thrown enough shade for one night.  Here’s the standings going into an intense battle next month.