A new season is upon Latveria, and this one begins the same way the previous one had ended. Agent @KingofTysons remains in control of the country which has seen a good deal of change between the seasons. Three new Agents are deployed to help defend Latveria, and they do not seem too keen to let King rest on his laurels. Agents @Ivoryhaze95 and @ladiesofcomics join the fray but it’s Agent @EvSynWilliams who comes out swinging. The new recruit challenges King right out of the gate, but Dr. Strange’s 11-point difference over Ev’s Hulk keeps King on the top of the hill for now. Ev does manage to dispatch returning Agent @JamesBSheppard by a slim margin in what promises to be the start of an exciting and well-fought season in Latveria.

Breakdown – Agent King earns 79 points and takes first place with the support of Fantasy Comic League All-Star Peter Parker, but his stand out performance comes from Lady Luck herself. Domino hits for the cycle and bests heavy hitters Doctor Strange and Iron Man to earn the second most points for King. She scores 21 points while appearing in one less book than both Stephen and Tony. Agent Ev keeps pace with King, his Deadpool hits for the cycle and matches Spider-Man’s score while Storm’s 20 points keeps him in the game. However, his gamble on Hulk, who only manages six points, is what keeps him in second place. A pair of Avengers earns 43 of Agent James’ 64 points, but he is likewise sunk by a dismal performance, this time coming from Cyclops and his seven points.

Venom, the hero of the month with 32 points, is Agent Ivory’s saving grace. She takes fourth place with a total of 53 points. Daredevil, a typically reliable draft pick, under performs greatly for her as he only nets six points for the month. Agent Ladies top performance comes from Captain Marvel, a character who slipped to the second to last pick in the draft. Carol scores 15 points for Ladies’ last place team. Her overall score of 41 points equals another unfortunate result for the latest agent to test the viability of an all-female team. 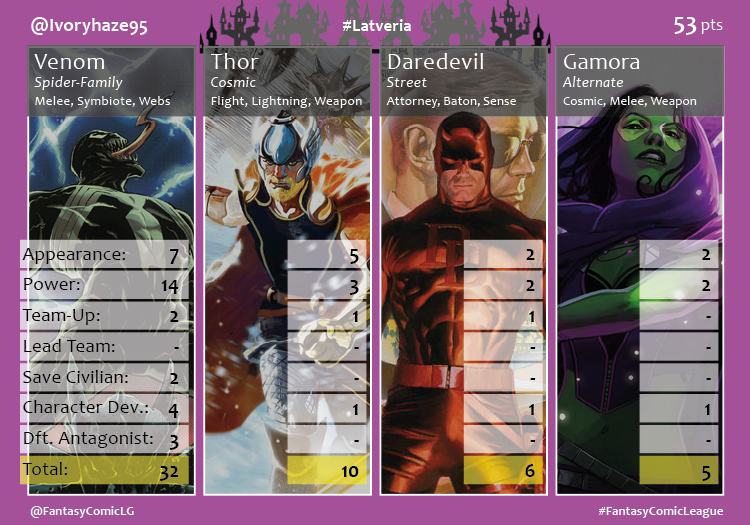 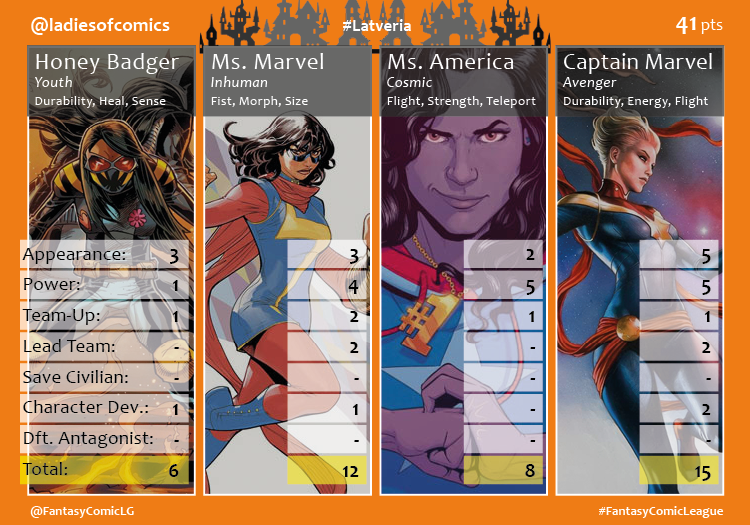