In a world that hates and fears them, the #DangerRoom division of the #FantasyComicLeague enters into its 2nd season. Returning division champion Bachman @anthonybachman returns with fellow mutants Trevitt @TrevittTrev, Daily @DailyXmenFacts, and Swampy @swampy19 as they welcome new recruit Kyle @blerdwords . All powerful mutants in their own right, but together an almost unstoppable force for mutantkind.

In the 3rd month of the season, the Danger Room heroes teamed up 60 times to save 14 civilians and defeat 10 adversaries in 106 appearances with 109 power usages.

July was full of ups and downs and a few lead changes as Daily and Trevitt duked it out for the top spot. DailyXMenFacts was able to hold back the onslaught of the #DangerRoom and lock up the monthly win with 97 points, and even increased his lead over 2nd place! Big 20+ scores and also Nightcrawler was there to show his support as only the fuzzy blue elf can do. TrevittTrev was able to maintain 2nd place but fell back 11 pts to end with a total of 86! He had a damn fine showing for his Avengers squad with the Ant Man option. The team of troublemakers repping swampy19 were able to push him up into 3rd with 55 pts! Mainly on the back of Deadpool putting up more than double the points of anyone else on that team! anthonybachman‘s powerful ladies and a touch of MultipleMan was enough to keep him in 4th place ending up with 48 points. While blerdwords did not get a great showing with 9’s all around except for the King of Wakanda, ending up with 39 pts for the month. And into August we go…

Remember, as you learn, so does the Danger Room and just because they’re holograms doesn’t mean they can’t hurt you. Until next month, Mutant And Proud. 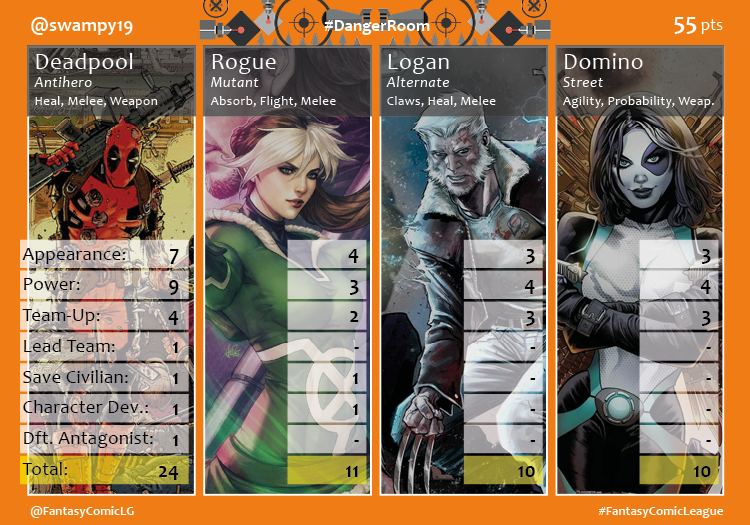