Hey Y’all, Agent Martineau here. June was a big month, especially for nuptials. One marriage failed before it begun, while an unexpected set of circumstances saw Rogue and Gambit tie the knot to become Mr. and Mrs. X. The classic Avengers, Tony Stark, Bruce Banner, and Thor Odinson return with big first issues, as well as number ones for some of the newer Avengers including: Stephen Strange, Bob Reynolds, Scott Lang, and Nadia Pym. In the X-Verse, Wade Wilson got not one but two number ones and Jaime Madrox returned from the dead to expand his presence in the Marvel Universe. Finales also arrived in June, for Mark Waid’s brief Captain America run and Dan Slott’s ten year stint on Amazing Spider-Man.

So how did the agents of the Multiverse do in the first month of summer? While Multiverse ranked at the bottom of the divisions, it was a tight race within. With the Spider-Ban in effect, only eleven points separated last place from first, so let’s work our way up.

Agent Lu came in on the bottom rung with 41 points. Still riding the high of Deadpool 2, Domino led his team with 16 points. Unfortunately, Nico only brought him two points, crippling his team during the final week of the month.

Agent Bittner came in fourth, with 46 points. He also rode the high of Deadpool 2, with his Merc with a Mouth leading the team with 17 points. Unfortunately, Captain America was unable to pull his weight and drug the team down with a measly seven points.

Agent UN took bronze with 49 points total. Tony Stark led his team with 16 points, followed close by the bride-not-to-be, Kitty, with 15 points. It was Valkyrie who let the team down, nabbing only six points total.

Agents Brat and Martineau were neck and neck going into the following week. Despite having the Hero of the Month in Kamala Khan (who scored 26 points), Brat came in second with 50 points. It was the rest of his team who let him down: Daredevil, Captain Marvel, and Venom all failed to break single digits.

For the second month in a row, Agent Martineau took gold. His team was led by Storm, with 18 points, who was followed closely by Martineau favorites, Wasp (15) and Loki (11). It was the oddball choice of Sabretooth that failed to break into double digits, but the rest of the team was strong enough to carry Team Illusions Of Flight into first place.

A big thank you to all competitors, who make up the very Best in the Multiverse. I look forward to the competition during the next three months. 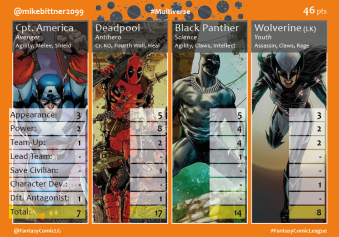 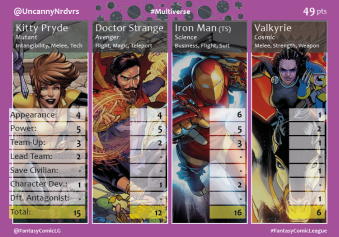 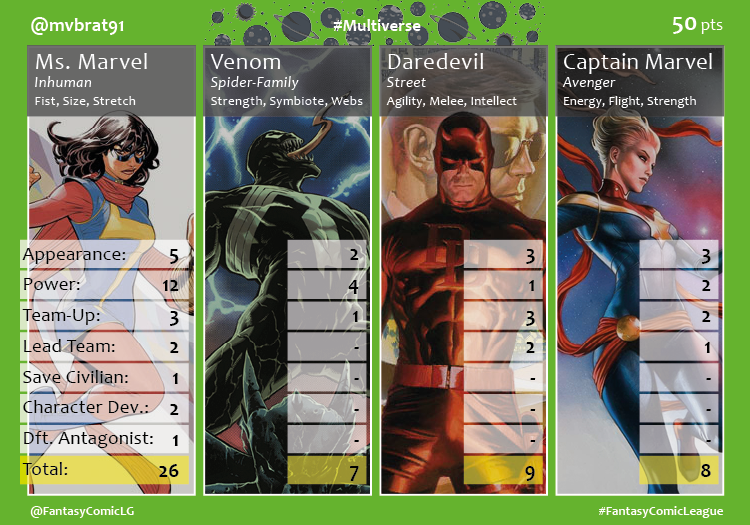