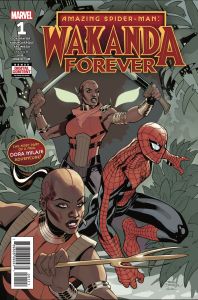 Spider-Man Forever! Forever making unnecessary cameos and topping the Fantasy Comic League power rankings. Peter Parker makes two surprise cameos to give him an undisputed “Hero of the Week” title, his second of the month. Peter Parker scores a total of 11 points, two of which came from quick pop-ins in Marvel 2-In-One and Sentry. Those brief appearances are what separate him from the runner-ups in the final week of June. Logan and the other Spider-Man, Miles Morales, both put up nine points to tie for second place. Miles earns his points from teaming up with Ms. Marvel and Venom in their books since his solo title recently ended.

Deadpool and Kitty Pryde are the second set of heroes to tie in the top 10. They score eight points each in fourth place. Black Panther continues his mysterious trip into the galactic future of Wakanda and scores seven points. He ties with Ms. Marvel for sixth place. She deals with revealing her superhero persona to her closest friends in the 50th issue of her ongoing title. Multiple Man’s science-based dupe takes over as the Prime Maddrox in the start of his new solo series and despite sharing his book with at least five other dupes takes eighth place all by his lonesome with six points. Multiple Man also puts out a combined 15 points for drafted heroes, the most in the week. Lightning strikes twice for the final duo to tie for a spot in the power rankings. Storm and Thor both score five points to round out the top 10.

Hero and power usages are a combination of all Fantasy Comic League divisions: Asgard, Danger Room, Do You Even Comic Book, Latveria, Midtown, Multiverse, Negative Zone and Wakanda. League participants should cross-reference the official points with their hero roster and drafted powers for their heroes’ scores. Please make sure to tweet any questions or comments to the official #FantasyComicLeague tag and @MixedMarvelArts for discussion!