Season two kicked off with a clean slate for the Agents of Midtown; following on from an action packed first season, Agent Chris took the win! Once again, massive congratulations to Chris on a strong strategy and tactical, successful mission.

Midtown’s Agents were given their new assignments, the draft order randomised; and Broadway, Len, Flesh, Chris & Spyder took their places in the fight.

Several divisions in the #FastasyComicLeague reviewed their strategical position and enforced a #SpiderBan this month. Midtown’s Agents considered their mission and chose to keep Spidey enlisted.

All five heroes of the week featured on Midtown Agents rosters. Carol (Chris), Kitty (Spyder), Daredevil (Len), Spidey (Len) and Rogue (Spyder) all held the title this month, with Spidey scoring the title for Free Comic Book Day too.

The assembled teams scored 127 appearances and used 128 powers throughout May. With 88 team ups, 23 lead teams and 23 character defining moments. Midtown’s heroes saved 9 civilians and defeated 12 antagonists in their battles throughout the city.

No surprises to anyone when Spidey took the prize for highest scoring hero, with Carol taking second and Daredevil taking third, while Captain America and Black Panther tied for fourth. With three of these heroes on one team, it’s no surprise who took first place.

Agent Len was unbeatable all month with the killer #TeamLawAbidingCitizen(mostly). She scored top on all categories and took full advantage of such an early draft and lack of the proposed #SpiderBan to boost her points. Agent Chris maintained second spot throughout May, with #TeamDuos onside, strong showing from both Marvels kept him trailing Agent Len. Agent Spyder maintained third with two members of #TeamGirlPower taking the title of hero of the week, though a poor showing from She Hulk left her unable to compete with Agent Chris. Agent Flesh took fourth with #TeamLadsOnTour. This time it was groom to be Colossus who let down the team. Agent Broadway took fifth spot with #TeamBigScreen. Despite Black Panther’s strong showing; upcoming movie duo of Ant Man and Wasp as the lowest scoring heroes of Midtown.

Many thanks to all Agents for your continued hard work and commitment. Congratulations to all! And best of luck for June!

And thank you all for your patience with me and the added support of League lead Brian while I’ve been recovering! 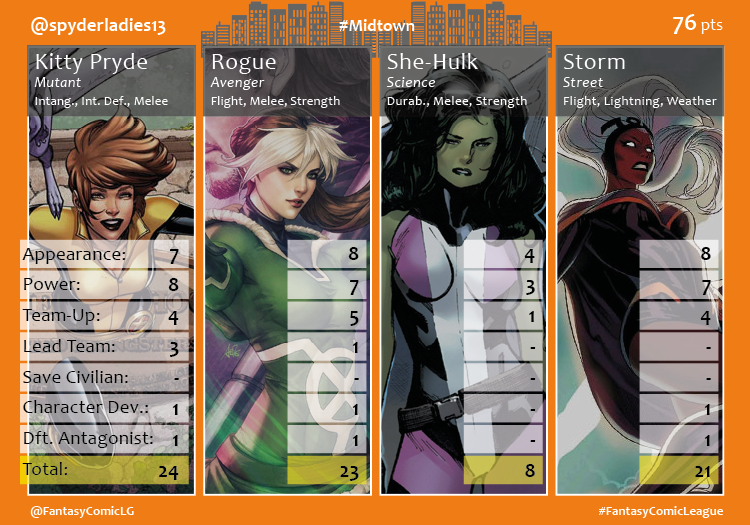