Hey y’all, Agent Martineau here. May kicked off a new season of the Fantasy Comic League and the Multiverse had it’s fair share of shake ups. Agents Demo and Doge left Multiverse, with Demo banished to the Negative Zone division and Doge taking some time off to explore the cosmos. Agent UN and Agent Brat hung around and we were joined by newcomers, Agent Bittner and Agent Lu.

May had the usual mix up in titles and creative teams, with one big exception. Brian Michael Bendis’ incredibly influential era at Marvel come to a close within the pages of Invincible Iron-Man. May also saw Jason Aaron kick off his Avengers run while Donny Cates slithered his way into the writer’s seat on Venom (while also leaving behind Doctor Strange). Gerry Duggan wrapped a Marvelous tenure on Deadpool, as did Greg Pak with Amadeus Cho. The Marvel Cosmos were a busy place, as Ta-Nehisi Coates took T’Challa into space for the Wakandan Empire story-line, and the Infinity Countdown tie-ins began. We also saw not one, not two, but four Hunt for Wolverine miniseries kick off; but remember folks, this is not an event!

Despite a strong showing for a first timer, Agent Lu’s team still took last with 48 points. Team Slay was led by strong performances from Thor Odinson and Laura Kinney (in her last month as Wolverine) but sadly could not slay the competition.

The race between fourth, third, and second were much closer. Unfortunately, Agent UN’s team fell behind and couldn’t close the gap before the end. Team Wild Cat of Oats took in 75 points, led by a stellar performance from the Man Without Fear, who netted 34 points.

The biggest upset of the month came in the final week, when Agent Bittner’s killer team of big name superheroes failed to bring in a single point. This left team Red, Blue, and Black with 81 points, led by Captain America with 28 points. This allowed Agent Brat’s Lady Liberators to rocket into first place. He ended the month with 96 points, with a team led by the Marvels: Kamala brought in 31 points, while Carol had 37. 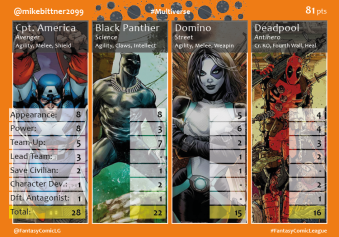 A big thank you to all competitors, who make up the very Best in the Multiverse. I look forward to the competition during the next three months. After Spider-Man’s landslide victory, Multiverse will be implementing a Spider-Ban for the remainder of the season.