Two of Marvel’s big events from 2020 are slated (Slotted?) to be given away in the latest Fantasy Comic League Overpowered Comics Giveaway! Enter for your chance to earn all of the Empyre books, including the tie-ins, as well as the Iron Man 2020 series plus tie-ins. Also included will be plenty of Dan Slott’s current run of Fantastic Four and few special bonus comics from his Amazing Spider-Man run including the landmark 800th issue and Slott’s final Amazing Spider-Man. Additional comics in this giveaway include more Fantastic Four centric titles such as Chip Zdarsky’s Marvel 2-in-One and a bonus signed copy of the 2-in-One Annual. As always with the Fantasy Comic League’s Overpowered Comics Giveaway, two playable decks of Marvel’s collectible card game from the 90s, OverPower are included. Both decks contain all you need to play, including hero cards, special cards, an assortment of power cards and more to allow you to build a deck to your liking. For instructions on how to play OverPower, check out OverPowercards.com.

In order to enter, please follow the Fantasy Comic League our social media accounts (Facebook, Twitter, Instagram) and like, comment or share any of the “Slott’s Fantastic Empyre” Giveaway posts between now and Tuesday, March 16. The more emphatic and supportive you are on social media, the better your chances are of winning! The giveaway is only eligible for fans in the United States of America and the Fantasy Comic League will cover the shipping costs of the comics. Digital copies of these comics are not included, all comics should be considered to be in ‘used’ to ‘good’ condition. 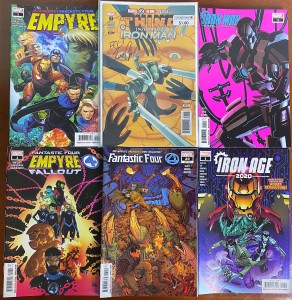