Hey guys, what a month it was. Multiverse took division of the month for the first time ever, and the competition had a new leader on the board each of the final three weeks.

Agent Hyrup was at the top of the charts at the end of that third week. His team was made up of Heavy Hitters: Iron Man, She-Hulk, Storm, Daredevil. Storm, shockingly, put in a weak performance with six points. Daredevil (15) didn’t hit as hard as Iron Man (23), but he put in more hits than Jen (13); not bad hitting harder than a Hulk. He finished the season in second place with 57 points. 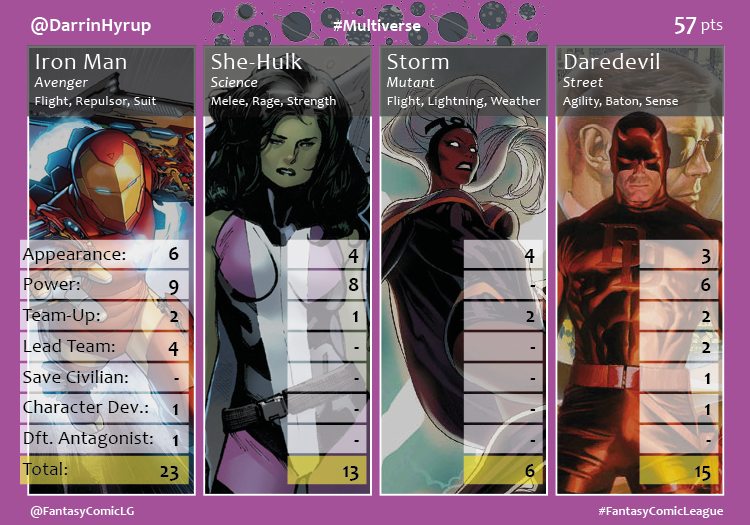 At the end of the fourth week, Agent Martineau sat on top. His team, HuntForTheSuperiorOcktober, was lead by Otto Octavius, the man who once made me quit comics. Spider-Gwen, Logan, and Kaine Parker made up his Spider-Geddon reliant team. Otto lead with 21 points, and Gwen did quite well with 15 points. Unfortunately, Kaine brought down the Parker name with only 7 points. He came in third with 56 points. 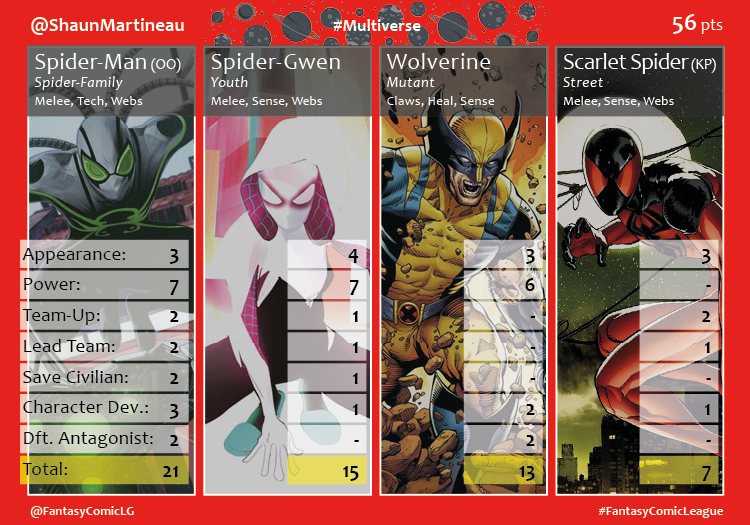 It was Agent Alex who took gold. His team #TryIt was Avenger heavy, with Jean Grey being joined by Thor, Captain America, and Black Panther. His team was incredibly well balanced: Jean (13), Cap (15), Panther (12), with Thor tipping the scale with a slightly higher score of 18. Big congrats to Agent Alex, who got 58 points for his first win. Well played.

Agent Brat came in fourth with 45 points. His team Spiders, Mutants, and Marvels (far from his best reference), consisted of Miles Morales, Dominos, and both the Marvels. Kamala was the weak link with only 8 points. A bizarre Weirdworld Champions storyline has handicapped the Champions. Carol carried the Marvel name up with a 14 points performance, with double digit contrubutions from both Miles (12) and Domino (11).

Agent 2099 went for a theme again. Team WeLoveThe90s had a 90s infused theme. It was lead by Venom, while also recruting both Ben Reilly, Miguel O’Hara, and Wade Wilson. Wade did the heavy lifting with 23 points, while no one else made it into the double digits. Miguel was a no show, Ben got 5, and Venom got 9. He came in last with 37 points. 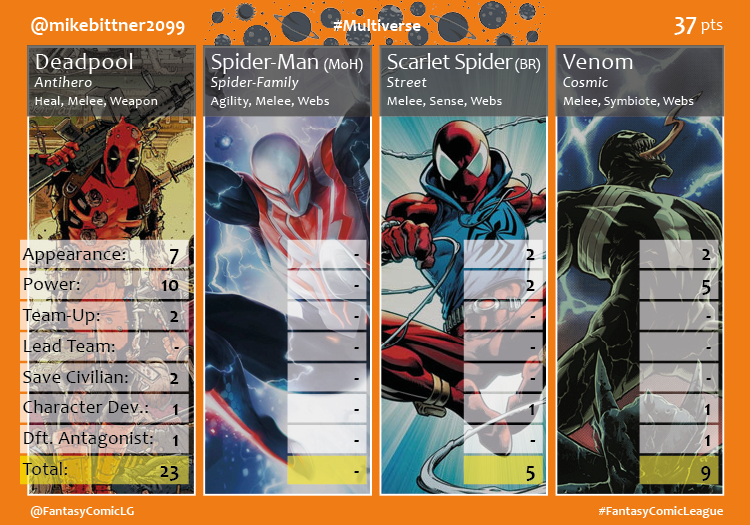 Record month for both Agent Alex and The Multiverse. Let’s take a look at the standings going into November.