We have reached the end of the 2018 summer season of the Fantasy Comic League. Here in the Asgard Division, our warriors—our Agents of Asgard—never disappointed, and we faced a down-to-the-wire nail-biter for the final results.

First, the August results followed by the totals for the season.

For the final month of August, Agent Lori (@LoriHyrup) rocketed her way into an easy first place finish with 88-points. A large chunk of that score divided between the leadership of Iron Man (Tony Stark) and the owner of the X-men name, Kitty Pryde. Domino and Rogue rounded out her team.

In second and third place for August, Agent Pom (@pomwonderland) and Agent Geeks (@GeeksGoneWildTw) both earned themselves 64 points. In the event of a tie for the monthly score, we go to the highest score of individual heroes. In this case, Agent Pom’s 29-point Deadpool outscored Agent Geek’s 23-point Captain America, giving Agent Pom 2nd place and Agent Geek’s 3rd. 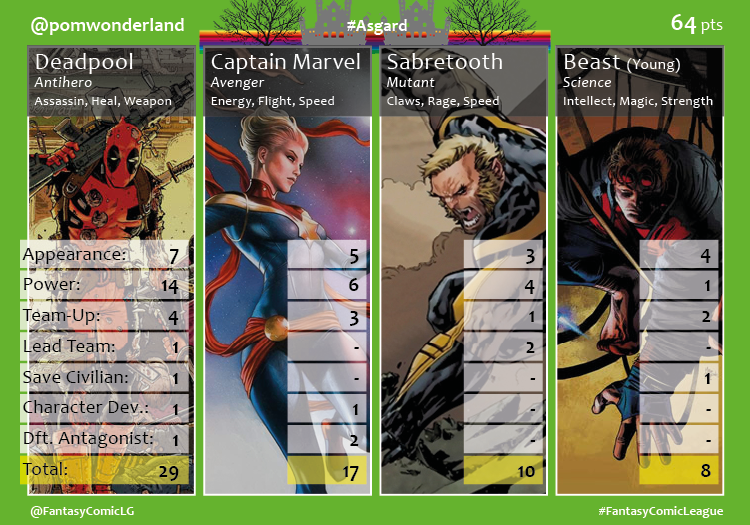 For the first time since the founding of the Asgard Division back in January, Agent Seren (@HamSandwchWoman) failed to finish in either the 1st or 2nd position. For August, her 56-points, under the leadership of Daredvil, earned her 4th place.

That brings us to Agent Cham (@Agent_Cham). After finishing 1st for the first time ever back in July, Agent Cham finds himself in the 5th position with 39 points, Thor Odison’s 18-point performance being the only one in double digits. Perhaps he jumped the gun on Symbiotes and Spiders?

Agent Lori’s 1st place finish, earns her 3 points and brings her up to 7 points total. Agent Seren’s 4th place finish earns her 1 point, also placing her at 7 points for the season. Agent Geek’s would have also earned 7 points had he earned himself 2nd place—something just missed because Deadpool outperformed Captain America (serious!). Because Agent Lori and Agent Seren tied for the Season with 7 points, it required us to dig deeper into the scores, at the total points earned between the two competitors. In the end, Agent Seren earned a total of 283 points, and Agent Lori earned a total of 290 points, giving Agent Lori the win for the season—her first ever season win.

With that excitement is out of the way, I’m proud to say that my research into Agent Seren’s heritage finally netted astonishing results. My suspicions proved true. Agent Seren is of Asgardian descent, after all, and not from just any Asgardian.

The letters I discovered on the burned scroll, “yrior” were the last letters of the word Valkyrior, and I went through great lengths and some fate-tempting to follow my lead. After, ahem, a near-death experience, I met with the Chronicler of the Valkyrior, someone surprisingly helpful. She told me of a former Valkyrie who had become a goddess in her own right. However, the goddess eventually grew frustrated with the All-Father… for what, I could not ascertain. About a millennia ago, she left Asgard, and no Asgardian heard from her since. Some Asgardians claim her to be a myth. Others claim the All-Father had her name stricken from the records. Fortunately, the Valkyrior remained in contact with her.

This former Valkyrie and Goddess of Fertility, one reputed to cry tears of gold, has been living a quiet life in Midgard since her departure from Asgard. I doubt Agent Seren knows that her grandmother is really a goddess in disguise, but that Valkyrie ferocity has certainly been evident in Agent Seren’s competitive performance.

The name of this mythical myth… Freya. No, not Freyja, the All-Mother. Freya, sister of Frid, former Valkyrie and Goddess of Asgard. This is certainly a tale for the ages. Now, should I tell Agent Seren? Will she even believe me? How does one even approach this? I need some mead!

The Asgard Division will move forward into the Fall Season of the Fantasy Comic League, and so the Saga of Asgard continues…

If you are ever interested in learning more about the Fantasy Comic League, reach out to @FantasyComicLG and express your interest. We are always looking for new participants.