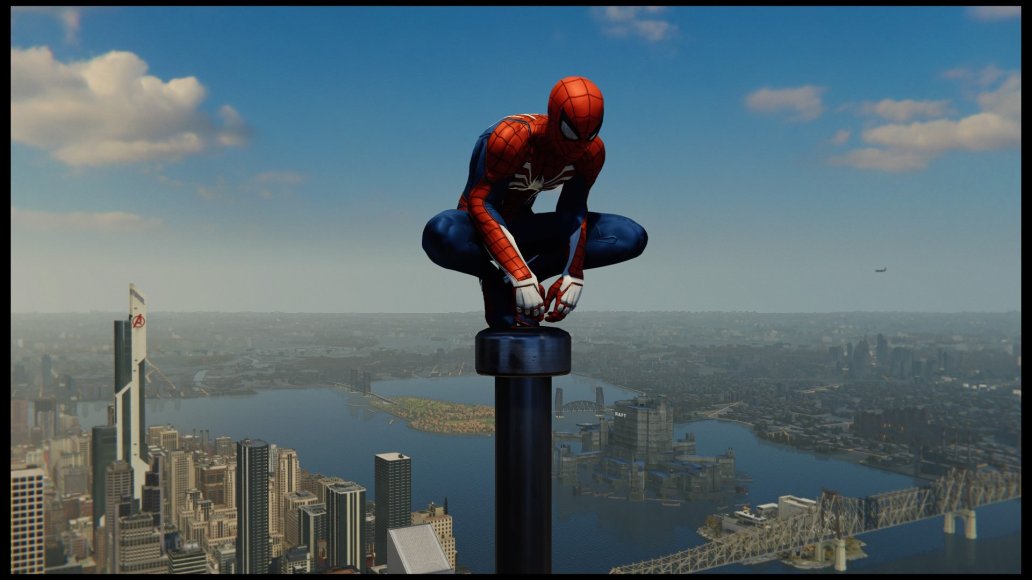 Welcome to the new Midtown! As the Fantasy Comic League enters into a new season the divisions, leads, and members got a cosmic cube refreshing and we are starting things off all new and all different again. I’m @anthonybachman the division lead for the new #Midtown, the designated friendly neighborhood for the league as Midtown will continue to be the welcoming home for Marvel’s flagship character as other divisions have decided to apply a spider ban in an effort to make things more even in their divisions. midtown believes if you’re going to fantasy draft you lose some of the fun if the Tom Brady pick isn’t an option so there will be no spider ban in Midtown. Welcome to our new friendly neighborhood, I hope you enjoy your stay. Joining me in this new division is a few #DangerRoom veterans and some new league recruits, say hello to @swampy19, @iaytd, @blerdwords and @whitenoizemedia.

In September the drafted heroes of #Midtown teamed-up 37 times in 88 appearances to save 8 civilians and defeat 10 adversaries with 94 power uses.

September shook us all up and dropped us into new territory, in a new division, with new competitors and that lead to another fun month of crazy teams and scores bouncing all over the month. When everything came to a full stop at the end of the month @iaytd  stood atop the new Midtown as the first monthly winner for Sept with 69 pts for the month. His powerhouse Venom helped lead his team of badass ladies to the finish line. There was a tie for 2nd place but with Spider-Man putting up 2 more points than Captain America for the month it breaks the tie and put @anthonybachman in 2nd place and @whitenoizemedia into 3rd with both scoring 61 pts. @blerdwords power combo of Deadpool and Ms. Marvel were let down by their teammates Gamora and Iron Fist and they all brought in 42 pts to snag 4th place. @swampy19 coming off his previous season win bid heavily on the mutants to carry him to the promised land and was promptly let down by Old Man Logan, young Cyclops, and Prestige. Along with Thor, they combined for 41 pts and it was only good enough for 5th place.

And with that, the season is underway and we will see you next month as Spidergeddon goes into effect and makes the 616 a battlefield again. Here are the season standings at the end of Sept: 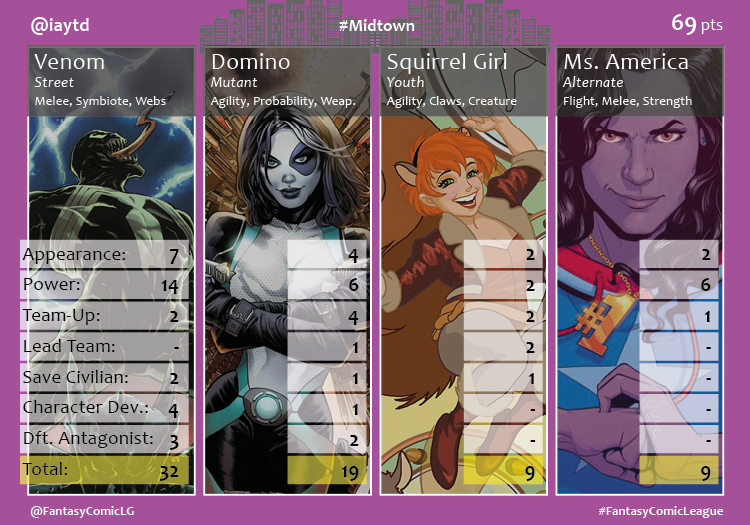 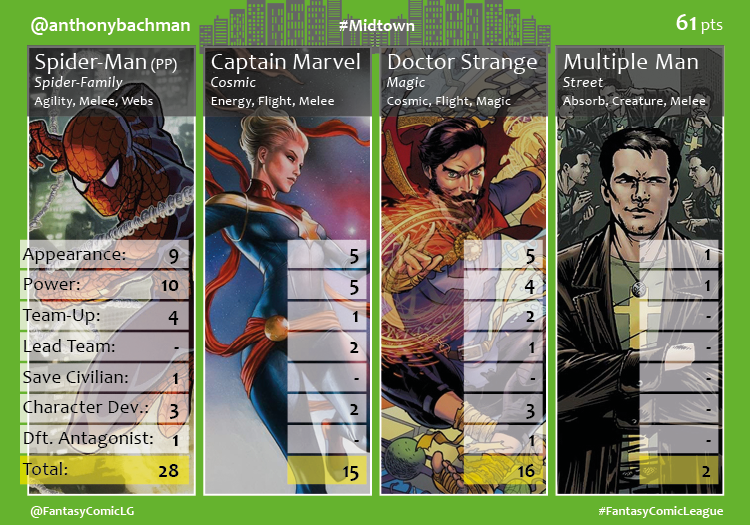 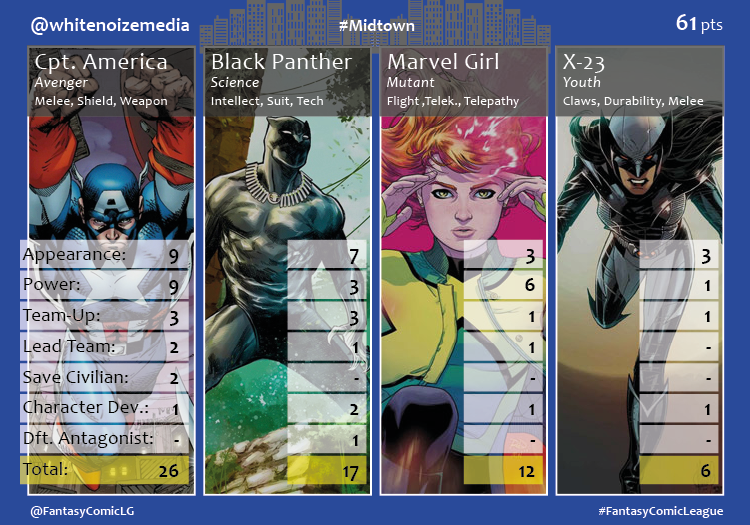 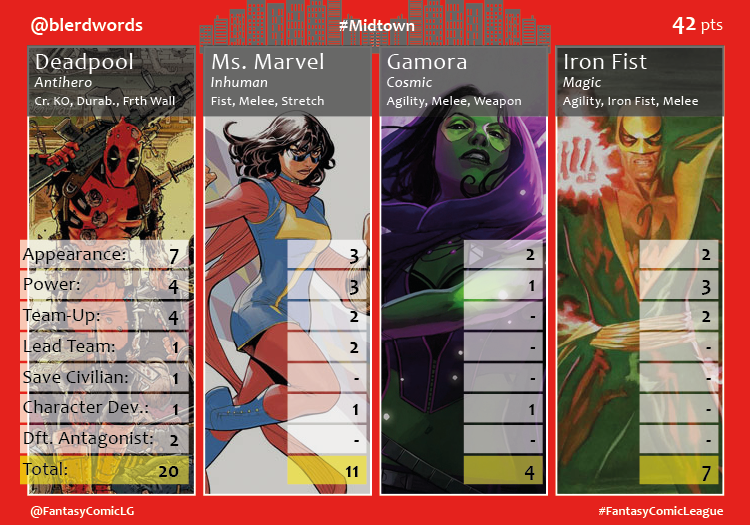 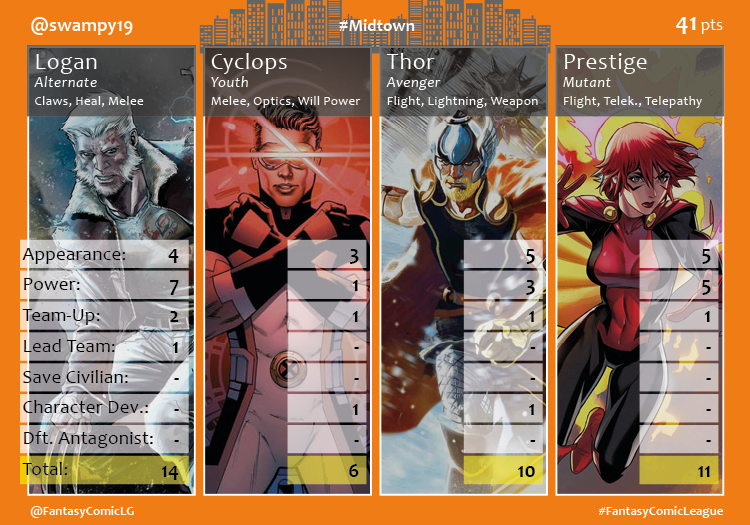