A new, yet familiar, team of heroes assembles in Marvel’s rebooted flagship Avengers book. Marvel’s “Fresh Start” initiative aligns perfectly with the new season of the Fantasy Comic League and the Avengers are topping the tier previews, unsurprisingly well-timed with the recent release of Avengers: Infinity War. More than half of the new Avengers team claims a spot in the top-heavy previews for the five-week month of May! Earth’s Mightiest Heroes get a mighty boost from the annual Free Comic Book Day event with a bonus comic! Peter Parker, another top-tier draft, stars in Marvel’s second FCBD offering.

Kitty Pryde represents the X-Men in the top tier of the preview rankings. All eyes are on the intangible bride-to-be as her wedding day approaches. But evil forces are conspiring to spoil her wedding day when they abduct her groom during his bachelor party! Rogue’s hot start may cool off some in the new season, but she may still be worth the gamble. The X-Men event of the month follows the “Hunt for Wolverine.” As rumors of the original James Howlett’s return percolate across the Marvel Universe, different groups of friends and foes set out in search for him. Domino lucks her way into the second tier with this event and the continuation of her new solo series.

Infinity Countdown continues with its focus on the Guardians of the Galaxy and includes two one-shots starring Daredevil and Darkhawk. Of the two, Matt Murdock has the better odds of snagging a draft in the new season. The conclusion to the Venomizedstory happens at the beginning of the month with a few potential sleeper picks who could crossover with Spider-Man in his 800th milestone issue at the end of the month!

As always, dopplegangers of our main characters are called out for easier identification and to distinguish them from our prime universe heroes. Be wary of the characters found in Avengers: Back to Basics, You Are Deadpool, Amazing Spider-Man: Renew Your Vows, Marvel Super Hero Adventures, Old Man Hawkeye (with the exception of Old Man Logan), and the Marvel Cinematic Universe-related books as they are not the same heroes as the ones featured in the below tier charts.

Best of luck to all divisions of the Fantasy Comic League: #Asgard: #DangerRoom; #Latveria; #Midtown; #Multiverse; #Wakanda; our newest division, the #NegativeZone; and the first community-based division. @DoYouEvenComicBook. Power rulings and definitions have been revised based on participants’ review in the previous month. Please see the attached Power Summary file for further power clarifications. Please follow along with our #FantasyComicLeague tweets on our Twitter for official power scoring and discussions. Seasons run for four months, stay tuned for your chance to join the official league and win a trade paperback of your choice!

These appearance estimates, based on comic solicitations and cover artwork provided by the Marvel Database wiki, are meant as a guideline and not an indication of a specific draft order. Character names, team designations and power sets conform to the most current information provided by the Database. Power designations are simplified for easier classification and choice, providing the majority of the heroes with 9 to 11 eligible powers from which to choose. As a reminder, you may only have one hero per team designation on your roster and are allowed to select three powers from the heroes’ power set. Powers in (parenthesis) are a subset of the overall ability and can be selected as well as the generic use of that power. For example, Deadpool can be drafted as any of his four team classifications and can use Weapons, Blades and Guns as his three powers (Blades and Guns being a subset of the overall Weapons skill). 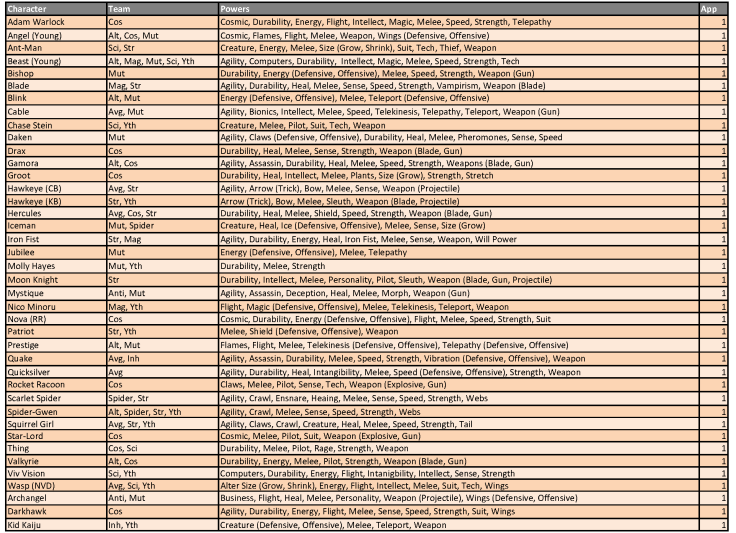