Between the events of Infinity Wars, Extermination, and Hunt for Wolverine, there were plenty of epic battles fought in #Wakanda during the final month of the second season of the 2018 #FantasyComicLeague.

The Elite “S” Squad came out in force. This devoted group brought in a total of 318 points, which consisted of saving 13 civilians, defeating 13 adversaries and miraculously navigating 15 life changing events.

Agent Snikt (@NickZG) brought in 81 points to secure first place thanks to the combined efforts of Tony Stark’s #IronMan and the Goddess #Storm herself. They brought in more than half his points followed closely by #CarolDanvers.

#Wakanda Division Lead, Agent Sistah (@S_Hero4Hire) and #TeamNoRhythmNation came in second place with 76 points due to strong a strong showing from #Deadpool and a respectable performance from #CaptainAmerica.

Agent Shaw (@Notingshaw) made a surge in the final week to reclaim third place and bring in 65 points for #Wakanda. Her ace in the hole was #Daredevil who consistently brought in points.

Agent Sempai (@Arydanika) completes her first season in the #FantasyComicLeague by coming in fourth this month and scoring 52 points for #Wakanda. Her top performer was #Domino although #BlackPanther was not too far behind.

Agent Sha (@La_Ney_sha) lands in fifth place this month with 44 points brought in for #Wakanda aided by the one-two punch of #Logan and #MsMarvel.

All in all, #Wakanda brought in 1,235 total points into the #FantasyComicLeague this season. Congratulations to Agent Snikt who takes home the top prize in #Wakanda for this round. Although the Elite “S” Squad will retire two fierce members, Agent Snikt and Agent Sistah, there will still be epic battles in #Wakanda for upcoming seasons of the #FantasyComicLeague! Glory to both Bast and Hanuman!

The Second Quarter of the 2018 session of the Wakanda Caucus has been adjourned. 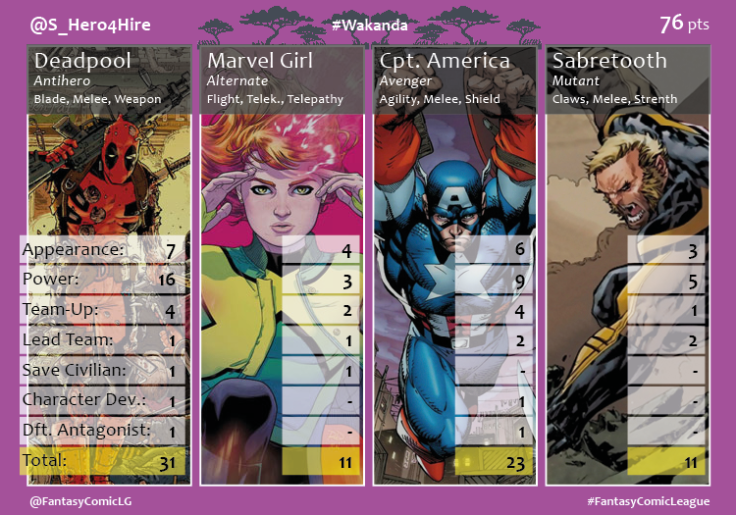 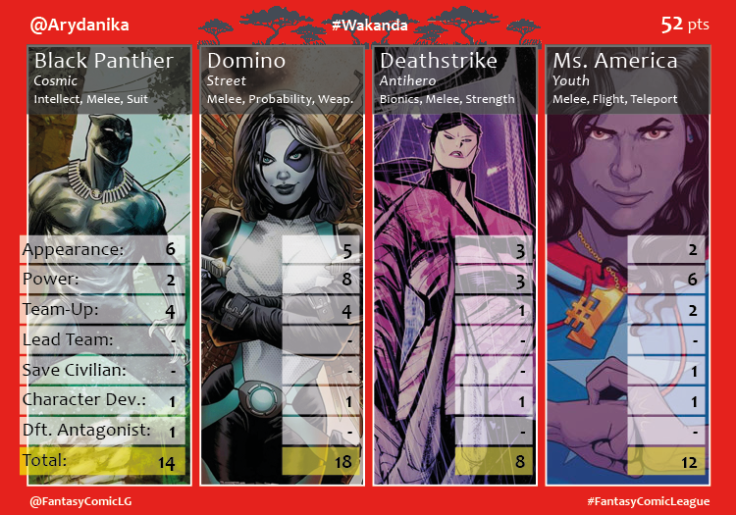